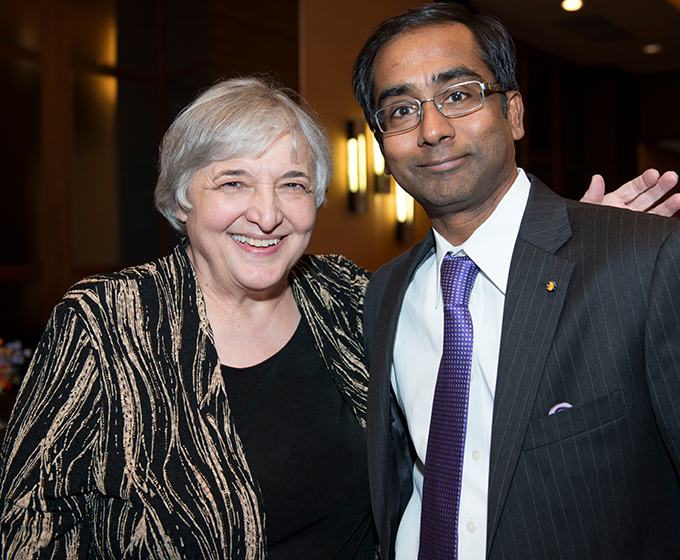 Dec. 5, 2019 — Rena Bizios, Lutcher Brown Chair and professor of biomedical engineering at UTSA, has been elected a fellow of the National Academy of Inventors.

The honor recognizes Bizios for demonstrating a prolific spirit of innovation in creating or facilitating outstanding inventions that have made a tangible impact on quality of life, economic development and the welfare of society.

By her election to the NAI, Bizios joins four other UTSA faculty members inducted into the NAI. President Taylor Eighmy was selected in 2013, electrical and computer engineering professor David Akopian in 2016, and Arulanandam in 2018. This great honor places those four among an elite group of researchers that includes presidents and senior leaders of research universities, Nobel laureates, National Inventors Hall of Fame inductees and National Academies members. Bizios will be inducted at the annual NAI meeting in Phoenix in April 2020.

Bizios, a chemical/biomedical engineer by training and a pioneer in the field of biomedical engineering, joined the faculty at UTSA in 2006. Her research interests include cellular and tissue engineering, tissue regeneration, biomaterials (including nanostructured biomaterials) and biocompatibility. Her research endeavors made seminal contributions to cellular engineering, the understanding of cell-material interactions, protein/cell interactions with materials (including nanostructured ones), and in elucidating the effects of pressure and electric current stimulation on cell functions pertinent to new tissue formation. Her research has applications in the tissue engineering and tissue regeneration fields.

The NAI Fellows Class of 2019 represents 136 research universities and governmental and nonprofit research institutes worldwide that collectively hold over 3,500 issued U.S. patents. Among the 2019 fellows are six recipients of the U.S. National Medal of Technology & Innovation or U.S. National Medal of Science and four Nobel Laureates as well as other honors and distinctions. Their collective body of research covers a range of scientific disciplines that includes neurobehavioral sciences, horticulture, photonics and nanomedicine. To date, NAI fellows hold more than 41,500 issued U.S. patents, which have generated over 11,000 licensed technologies and companies, and created more than 36 million jobs. In addition, over $1.6 trillion in revenue has been generated based on discoveries by NAI fellows.

The NAI was founded in 2010 at the University of South Florida to recognize and encourage inventors with patents issued from the U.S. Patent and Trademark Office, enhance the visibility of academic technology and innovation, encourage the disclosure of intellectual property, educate and mentor innovative students, and translate the inventions of its members to benefit society. The NAI publishes the multidisciplinary journal Technology & Innovation.