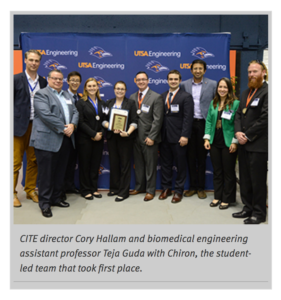 Chiron, a student team that created a new type of gauze that has increased absorbency to prevent external hemorrhaging, won the top prize at The University of Texas at San Antonio (UTSA) $100K Student Technology Venture Competition. The challenge was sponsored by the UTSA Center for Innovation, Technology and Entrepreneurship (CITE).

The team was formed by UTSA students Madeleine Farrer, Hannah Jones, Brian Ruliffson, Jose Trevino, Alex Sutcliff and William Baldridge. They found that because of an increased use of explosive devices in modern warfare there’s also been a rise in military injury. The group set out to address the common problem of managing external hemorrhaging in combat wounds, especially traumatic amputations. Their gauze, ColdClot, uses three different methods to reduce bleeding: hemostatic gauze, super absorbent polymers and an endothermic reaction to reduce the overall rate of bleeding across a large wound.

Chiron was awarded $100,000 in cash and in-kind services to jump-start their company. They worked with the UTSA Office of Commercialization and Innovation to file a patent application and are now looking for investors.

The second prize went to DentaSense, formed by UTSA students Daniella Bojado, Steven DeLeon, Frank DeLuna, Alan Kosub, Destanee Miller and Alexis Arteaga. The team presented a portable device that can detect cavities at an early stage, when they are still reversible.

The panel of judges reviewed each team’s product in a morning symposium where business and engineering students presented their senior design projects. In the afternoon the six competing teams presented their product-to-market strategy in a five-minute pitch.

Established in 2007 and held annually, the $100K Student Technology Venture Competition offers UTSA undergraduates in business, science and engineering with the top-tier opportunity to build a technology, patent it, create a business around it and launch it in a rigorous incubator program. The top three teams have access to a prize pool of more than $100,000 in funding and in-kind services to launch their new companies.

Since the competition’s inception, two winning teams from previous competitions, Leto Solutions and Invictus Medical, have demonstrated steady progress toward commercializing their products. Last year’s winner, InfraVein, has since received a $50,000 NSF grant to commercialize their product.