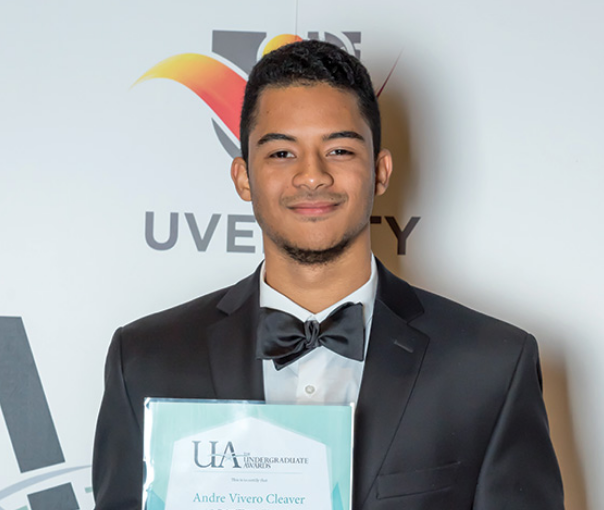 The Regional Winner, Cleaver, with his paper “Inverse Finite Element Analysis of Compressed Mouse Lenses for Mechanical Insights into Presbyopia” is the highest performing paper in the U.S. and Canada region in the Engineering category. Flores received a Highly Commended award for his paper “Design and Advantages of a Bioretention Area as a Best Management Practice for Low Impact Development” in the Built Environment category.

Cited as the ultimate champion of high-potential undergraduates, and often referred to as a “junior Nobel Prize,” The UA is recognizing excellent research and original work across the sciences, humanities, business, and creative arts.

“When I heard I was selected, I felt a sense of pride in the fact that the effort and time I put into the project was recognized and rewarded,” said Cleaver, who graduated from UTSA in spring 2016 with a degree in biomedical engineering and is currently enrolled in the Mechanical Engineering MS/Ph.D. program at Tufts University in Boston. “I have never been ­­an avid writer, but this award recognized the hard work and dedication I put into constructing this thesis. I also felt a sense of humility in the fact that there were many other strong and capable applicants also in competition for this award.” Andre Cleaver shows off his Undergraduate Award in Dublin, Ireland, this fall.

Flores, who graduated from UTSA in spring 2016 with a degree in civil engineering, was pleasantly surprised when he heard he received a Highly Commended award, which put him in the top 10 percent of entrants.

“I was not expecting to win,” he said. “When I got the email, I was waking up, reading my emails with one eye closed and the other one opened. When I read that I was in the top 10 percent in my category, I thought I was getting the information wrong. But after reading the email a couple of times I realized that I actually was one of the winners! I was very proud of myself, very thankful for my advisor Dr. Heather Shipley, and very thankful for UTSA and the Honors College. This award has made me realize that I have still a lot to learn and that if you work hard and have confidence in your job, you can do something outstanding that could help the world and society.”

The Undergraduate Awards received a record number of submissions in the 2016 program, with 5,514 papers from undergraduates in 244 institutions and 121 nationalities. The Global Winner is the highest-performing paper within its category and the Regional Winners are the highest-performing Highly Commended papers from their region within a category. The seven regions of the UA 2016 program are: the Island of Ireland, Europe, USA & Canada, Latin America, Oceania, Asia, Africa & the Middle East.

“This is a huge achievement for the University of Texas at San Antonio and its students,” said Louise Hodgson, CEO of The Undergraduate Awards. “UA received the highest number of submissions to date with only the best papers making it through the judging process. The competition was extremely tough and the judges were astounded at the high quality of undergraduate research in the program this year. Congratulations to this year’s successful entrants.”

Cleaver and Flores were invited to meet their fellow awardees at the annual UA Global Summit, which took place in Dublin, Ireland, on November 8-11, 2016. The attendees were addressed by the likes of NASA Astronaut Dr. Mae Jemison, Shiza Shahid of the Malala Fund, MacArthur Fellow Kyle Abrahams, and many more speakers and facilitators.