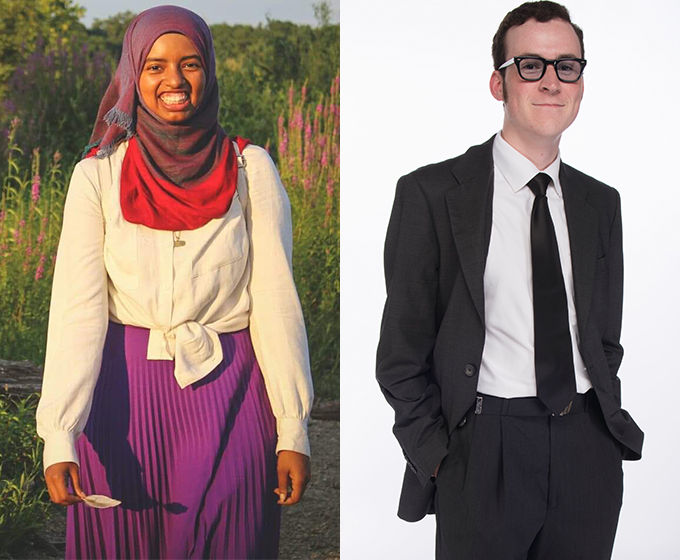 APRIL 6, 2020 — UTSA students Naomi Alyafei and Christian Strong have been awarded the 2020 Barry Goldwater Scholarship, one of the oldest and most prestigious scholarships for natural sciences, engineering and mathematics students in the United States.

The Goldwater Scholarship Foundation awarded 396 scholarships to college sophomores and juniors around the nation who were identified as showing exceptional promise in becoming research leaders in STEM fields. This is the second consecutive year in which two UTSA students were named Goldwater Scholars as Alyafei and Strong become the fifth and sixth students in UTSA’s history to earn the recognition. Both are juniors in the Honors College and serve on the President’s Student Advisory Council. They will each receive a $7,500 stipend.

Alyafei is a biomedical engineering major with a concentration in biomechanics. Her journey to this honor and to UTSA itself is a remarkable one. Born in Somalia, she and her family were forced to immigrate to Yemen at an early age and resettled in Indonesia during the Arab Spring. As they awaited refugee status to move to the U.S., Alyafei was not allowed to attend formal schooling for a period of three years, a time in which she came to greatly value education.

“As a student coming from a low-income, first-generation refugee, single-mother household, education is my hope to better my life and to contribute to the development of stronger well-educated future generations,” Alyafei said. She arrived in the Alamo City with her family at the age of 17. Although she initially hoped to attend medical school with aspirations of becoming a doctor, Alyafei’s love for mathematics inspired her to pursue a major that incorporated both biology and math. Biomechanical engineering, she said, was the best choice.

At UTSA she has established herself as a talented researcher and student leader within the National Institutes of Health–sponsored MARC U*STAR pre-Ph.D. research training program for minority students. Alyafei works under the tutelage of renowned UTSA faculty Rena Bizios and Teja Guda researching the musculoskeletal system, movements of the human body and diseases that affect mobility. MARC U*STAR provides support as she attends meetings and seminars, designs experiments and validates findings.

“I was astonished by the opportunities provided for undergraduates at UTSA, especially access to hands-on research,” she said. “Research provides undergraduate students like me the opportunity to tackle masses of complex problems and solve it with simplicity and clarity as well as the potential to transform ideas into reality.”

Alyafei further honed her skillset at summer research programs—after her freshman year at Indiana University Purdue University Indianapolis and, most recently, at the Mayo Clinic in Rochester, Minn. In addition to being an undergraduate research leader she has proved time and time again to be a student and community leader as well. Alyafei has recruited many prospective students to the MARC U*STAR program and tutored students in Greater San Antonio in STEM subjects through the Muslim Children Education and Civic Center.

These qualities and endeavors undoubtedly contributed to her receiving the Goldwater Scholarship, which she described as an incredible privilege. “Winning a prestigious scholarship like Goldwater says a lot about the support system I have at UTSA,” she explained. “This is the product of guidance, mentorship and help I received from many different professors and faculty members who invested their time in making sure my professional development was moving forward.”

Strong has also been a student luminary at UTSA and a participant in prestigious summer research programs at top universities. A chemical engineering major from McAllen, Strong is part of the UTSA Top Scholars program, which recruits students from across Texas who excel in academics, leadership and service.

Last summer Strong worked as an organic chemistry research intern at the Massachusetts Institute of Technology, helping to improve the synthesis of an antiretroviral used to bolster the quality of life of individuals living with HIV. Working under MIT chemistry professor Timothy Jamison and alongside an MIT doctoral student, he had a broad aim of his research to make the drug more accessible to vulnerable populations.

This kind of research doesn’t stray too far from what Strong has been doing in the organic chemistry lab of UTSA professor Doug Frantzfor the past two years. The bulk of that work has gone toward the development of new catalysts that can ultimately be used to create natural products, pharmaceuticals and commodity chemicals in a way that’s more cost-effective and environmentally responsible.

Although he’s a chemical engineering major, Strong plans to pursue a Ph.D. in chemistry with a focus in organic chemistry after he wraps up his undergraduate education at UTSA. Strong says his longtime goal is to apply scientific discoveries to solve global problems, and working as a medicinal chemist in the field of pharmaceutical research will give him the opportunity to do so.

“Dr. Frantz has opened my eyes to the interdisciplinary requirements of the modern chemistry laboratory, which has made me feel more comfortable in my plan to pursue graduate studies in chemistry,” he said. “Beyond this, the open-mindedness and support offered by many of UTSA’s faculty and staff members has helped me develop this mindset.”

Like many students, Strong has research pursuits that have encountered recent roadblocks due to COVID-19 restrictions. He was scheduled to present his research at the American Chemical Society national conference in Philadelphia in March, but it was canceled. Strong was also awarded the Think Swiss Scholarship to conduct research at the Swiss Federal Institute of Technology in Zurich this summer but now hopes to use the award in the winter.

Neither these changes nor the recent shift to online learning have brought him down. As a participant of four UTSA Alternative Spring Break programs, in which students connect with communities across America and volunteer alongside their peers, Strong is well-known for his positive attitude and spirit of engagement. “I have really seen a lot of resilience in the UTSA community and, despite the hardship, I am prouder now more than ever to be a Roadrunner,” he said.

Three other students from UTSA competed for the award: Cole Moczygemba (physics), Taylor Spiller (chemistry) and Shayma Toujani Mersani (chemical engineering). UTSA picked these five nominees to compete nationally according to their academic excellence, research experience and intellect demonstrated through a research essay. Their projects ranged from designing tools to predict the oxidation of metals in nuclear reactors to synthesizing new compounds that will be used in preclinical trials to treat aggressive forms of breast cancer. Students worked in UTSA labs in collaboration with organizations such as Westinghouse Electric, Bristol-Myers Squibb, and the UT Health Science Center at San Antonio.

The Office of Nationally Competitive Awards at UTSA coordinated the application and review process, putting together a selection committee of faculty and staff who reviewed all nominations and provided top nominees with advice on strengthening their applications. Selection committee members were:

Housed in the Honors College, the Office of Nationally Competitive Awards helps UTSA students prepare for and apply to prestigious national scholarships that allow them to pursue amazing academic and career opportunities worldwide.