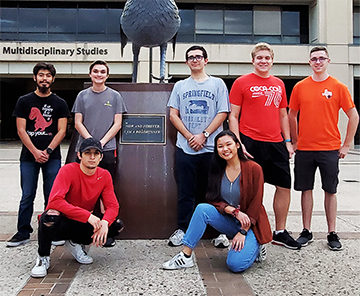 Nov. 18, 2019 — UTSA’s Advanced Robotics student organization and the Engineering Student Council will host the first Sumobot competition with the aim of letting participants explore Arduino, an open-sourced electronic platform hardware and software, and have fun while practicing building simple robots. The robots will be composed of solely Arduino components and made of 3D printed parts or building materials supplied by Advanced Robotics.

The competition, scheduled for Friday, Nov. 22 from 3–7 p.m., will have teams consisting of up to three people each with a $15 registration fee per person. The competition is structured to coax participants to work in a team, as opposed to entering as individuals. More team members will give the robot a better chance of winning.

“With the first $15 from a team or individual, we buy the parts necessary to build a Sumobot,” explained Madassery. “If you’re competing as an individual, then your budget is fully spent on the basic electronics. But if you’re in a team, then you have the ability to spend an additional $15 to $30, based on the number of team members you have.”

The teams may use the extra budget to upgrade their robots if they wish to do so. Any part of the budget that is not used will be added onto the first and second place cash prizes.

Each round of the competition will be won by making the opposing robot leave the fighting ring or by neutralizing the other robot in a nondestructive manner. The robots are allowed to display “nonlethal” battle techniques, such as pushing, shoving and flipping.

“The basic rule of the competition is to be the last sumobot standing,” stated Madassery.

Once the registration process for the competition is complete the teams are required to submit three documents. The documents include a preliminary design submission, a dritical design submission and the robot’s user manual. The PDS document is a basic explanation of the robot along with the dimensions, fighting techniques, defensive techniques, and a list of materials needed to make the robot. The CDS document is an in-depth report of the robot with CAD renderings and further specifications. The robot’s user manual should include all necessary information on the functions, including step-by-step instructions on the construction of the robot. The user manual is to be submitted before the competition with the robot for inspection.

“The primary purpose of having the teams submit these documents is to give them experience on writing technical documents,” said Madassery.

Advanced Robotics also provided Arduino workshops every Monday to help any of the teams that were struggling with their robots. All participating Sumobot teams were encouraged to attend. Led by the workshop director, Mohammed Ahmed, executive assistant of Advanced Robotics, the workshops covered an in-depth look into the different components that are used in the robot, and the code necessary to operate the different electrical aspects. Currently, the curriculum for the Arduino workshops has been completed; however, Advanced Robotics is still providing open workshops in their lab (AET 1.202) on Fridays after 4 p.m. These open workshops allow Sumobot teams to build their robots with tools in the lab.