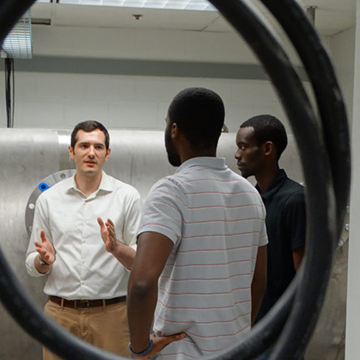 JANUARY 30, 2020 — Chris Combs, the Dee Howard Endowed Assistant Professor in UTSA’s Department of Mechanical Engineering, is one of 40 young researchers who will receive a grant from the Air Force Office of Scientific Research’s Young Investigator Research Program.

Hypersonic flight, with velocities faster than five times the speed of sound, is an emerging national priority that has the potential to be a truly disruptive technology with an impact on commercial aviation, defense and space exploration. Hypersonic speed, or Mach 5, is a velocity of roughly 4,000 miles per hour.

Sustained flight at these speeds has obvious appeal when one considers that a hypersonic trip from New York to Los Angeles would take only 30 minutes. This flight regime is also significant for military and defense applications, since a rapid-response capability to hotspots and crisis points around the world is highly desirable.

Recent demonstrations of hypersonic technology by Russia and China have put pressure on the United States to develop hypersonic systems of its own; however, hypersonic flight poses many technical and engineering challenges owing to the extreme flow velocities, temperatures and pressure loads imposed on a vehicle system. One of the many issues with sustained and reusable hypersonic flight is the extreme heat experienced by these vehicles, which can approach the temperature of the surface of the sun.

The design of hypersonic systems is further complicated by the presence of shock waves on the surface of a vehicle. These shock waves are generated by fins and control surfaces and can create catastrophic pressure and thermal loads leading to vehicle damage or failure.

“Moving at such high speed, if a shock wave is interacting with a vehicle surface it can quite literally burn a hole through your aircraft, so that’s obviously something we’d like to avoid,” said Combs. “The problem is that the underlying physics of these interactions is very complex and the necessary experiments and computations are quite challenging. So after over 50 years of research in this area we still do not have a good feel for how to control or mitigate these interactions, particularly when they occur over realistic vehicle surfaces.”

To address these issues, Combs will employ real-world materials to study the effect of surface roughness on the dynamic behavior of hypersonic shock-wave interactions in UTSA’s Mach 7 Ludwieg Tube facility. Coupled with the deployment of a variety of laser-based experimental measurement techniques, this approach should reveal key insights into the nature of these flows that will aid in the design of the next generation of Air Force flight systems.

The hypersonic Ludwieg Tube facility, which is anticipated for completion in March 2020, consists of a long section of pressurized pipe—the driver tube—which creates a hypersonic flow in the test section by exhausting through a nozzle and into a vacuum reservoir.

Ludwieg tubes are classified as impulse test facilities that are characterized by a rapid release of energy and short windows (tens to hundreds of milliseconds) of test time. However, by using high-speed data acquisition these relatively short test windows still result in hundreds of thousands of data points for each wind tunnel run.

Hypersonic wind tunnels like UTSA’s Mach 7 facility are rare, with approximately one dozen Mach 5+ facilities at U.S. universities. Once complete, UTSA will be operating one of only three Mach 7+ hypersonic facilities housed on an academic campus in the United States