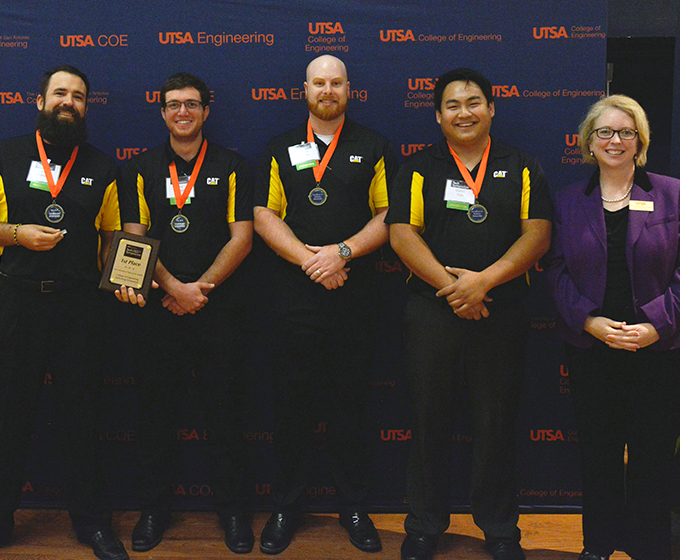 3BM was formed by Conrad Bowden, Daniel Tran, Cory Weinberg and Greg Williams and was mentored by George E. Karutz. The group created a paint-curing apparatus system that allows infrared paint curing technology to be used on flat surfaces as well as complex shapes, such as engines. During the course of development, the students demonstrated to their industry sponsor that their system could reduce utility costs and paint curing time by 60% each.

The student team will receive a $4,000 cash prize for its first place finish. Additionally, it received an Excellence in Industry Partnership Award from College of Engineering Dean JoAnn Browning for its successful work.

Second place at the symposium was awarded to Alt-Bionics for its globally available robotic arm. The product, developed by Max Brecheisen, Evan Jenkins, Ruairidh McWilliam and Ryan Saavedra, is an artificial intelligence–enhanced bionic hand for below-elbow amputees that restores basic and essential mobility for its user. Although prosthetic hands can cost up to $160,000 per person, the UTSA students’ prototype cost less than $700 to produce. The students will receive a $3,000 cash prize.

Bexar Aerospace received third place, which comes with a $2,000 cash prize. The team, made up of Jeremy Browder, Robert Doris, Eduardo Gamez and Lino Villanueva, developed a soft suspension system for ground vibration testing of aircraft. Their technology allows for the testing of aircraft from weights of 1,750 pounds to 62,000 pounds.

Three Excellence in Engineering Awards were also given to Design I teams at this month’s symposium. Winners of those $1,000 cash prizes are:

UTSA recognized one team from each academic department participating in the symposium with an Excellence in Engineering Award. Recipients are:

Walt Downing, executive vice president and chief operating officer of the Southwest Research Institute, attended the closing ceremony to present an award to UTSA students from the Joint Aerospace and Electronics Systems Society and the Systems, Man and Cybernetics Society. The Wired team, comprised of Michael Emperador, Tyler Hutzler, Helena Luu and Quynh Vu, received the award for their road sentry system. The technology can be used to track down vehicles fitting a specific description—using either license plate information, vehicle color/type or both—and is spotted via systems affixed to police vehicles.

Held semiannually, the College of Engineering’s Tech Symposium is the capstone project of UTSA’s engineering program. The hands-on learning opportunity enables students to apply the knowledge and skills they have accumulated throughout their undergraduate studies to design, develop and implement innovative and relevant engineering products. It also provides students with an opportunity to network with industry leaders and differentiate themselves from students at competing universities.

The College of Engineering’s senior design teams work together over the course of two semesters, including the time over the midsemester break. A team of four will log somewhere between 1,600 and 2,000 person-hours (approximately 200 to 250 hours per person per semester) to complete their projects.

“The Tech Symposium is a hands-on event that gives our students the opportunity to let their brilliance shine,” said Browning. “Our seniors are participating in cutting-edge work using the knowledge and skills they have acquired during their time here at UTSA. We are shaping the future of engineering.”

The six cash prizes awarded to students at the end of the symposium were sponsored by Karutz, Bill Balthrope at Mood Texas, Paul C. Kimball, Texas Capital Bank and Texas Research and Technology Foundation.