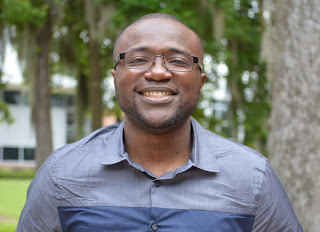 Parfai Masungi is one of the lucky ones. At the age of 15, he won a green card lottery visa  and with it, a ticket to leave the Democratic Republic of Congo (DRC). This was his chance to escape the country embroiled in “Africa’s World War,” the Rwandan Genocide civil war where more than six million people were killed. His home is the same place that became synonymous for the use of children as soldiers and where thousands of kids work deep in the mines with bare hands to dig for cobalt, the mineral that makes mobile phones possible.

“The future is death,” says Masungi about what youth in the DRC feel. “I couldn’t let that happen to me. I had an opportunity to do something better.”

The road that led out of the DRC for Masungi started with walking seven miles each day just to get to school. And on Saturdays, when kids usually play, he went back to school to learn English instead. His daily life was made even more dangerous as he had to be wary of guerrilla violence from the encroaching war into the capital Kinshasa, where he lived. Many times, curfews were the norm.

Then in November 2010, after a year of going through extensive interviews with the American consulate, Masungi, with the rest of his family, landed in Dallas, Texas. He knew his parents didn’t have the means to pay for a higher education. Athletics became the path to excel and get into college as he played football and track and field; however, he was diagnosed with a heart condition that required emergency open heart surgery, cutting short any hopes of athletic stardom.

During his time at UTSA, Masungi worked on testing high-strength reinforcement steel bars, a building component that promises to save energy and money in new construction. The 80-ksi bars are designed with spiral patterns that focus on flexure and anchorage behavior. They are fabricated by cold working, long a method of producing high-strength reinforcement below the recrystallization temperature.

“In our study, we investigated the mechanical properties and performance of the spiral steel in concrete slabs by conducting monotonic tension tests. Current building codes in the United States limit the use of high-strength reinforcing steel,” Masungi explains. “These limitations are mainly due to a lack of profound research and understanding and limited test data on the performance and effects of high-strength steel in concrete structures.”

The use of high-strength steel bars in reinforced concrete has the potential to improve design methods in concrete members and significantly reduce the quantity of steel used in construction. This would reduce energy consumption related to fabricating, manufacturing, and transporting the steel.

Upon graduation, Masungi has an offer to start a PhD program at the University of Florida, where he previously interned and assisted in the development of a pilot program to work on algorithms that guide driverless buses. Right now, he’s hoping to win a fellowship from the National Science Foundation and perhaps pursue more training at UTSA so he can be close to his sister, who currently attends the institution.

As Masungi relates, “If I receive the NSF Fellowship, I would like to pursue more training in structural and transportation engineering. This would focus on high-strength materials and sustainable design of reinforced concrete and structural steel members and frames.” The top schools where he would like to pursue his advanced graduate studies include Stanford, UTSA, Princeton, University of Florida, or Rensselaer Polytechnic Institute.

Although he’s only 22 years old, Masungi is mature beyond his age. Yes, he has some unpleasant memories of the Congo, but he also feels a responsibility to give back to other Congolese youth so they no longer envision a bleak future. He wants to have his own engineering firm, set up educational exchange programs, and export infrastructure technologies back home.

“I want to give Congo students the opportunity to come to the U.S. and get that education. I don’t take being here for granted,” Masungi says.

Milady Nazir is a public affairs specialist at the University of Texas at San Antonio Office of University Communications and Marketing.